Suoni Per Il Popolo review in the Brooklyn Rail 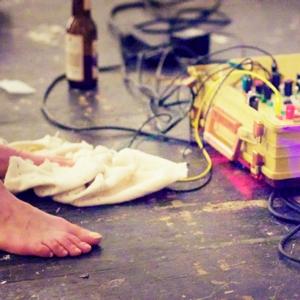 Do a last-minute show fill-in for dear friends Xarah Dion and Will Eizlini and a complete stranger will publish a few words about it in an otherwise very great Suoni's review in the Brooklyn Rail !
" Emilie Mouchous, in the following set, was equally engaging in a different mode, building a slow, ever-mutating drone for a peaceful, calming effect. Between Lafrance’s mad scientist tinkering, and Mouchous’s strange setup, which she controlled partly with her feet, these musicians brought visually engaging elements to a genre of music that is usually sorely lacking in that regard."
The picture was taken during a performance at Chicago's Tritriangle (march 2014)